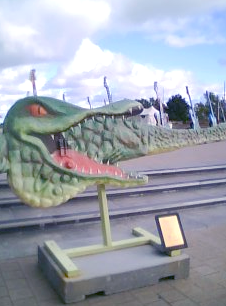 Outside the Rock and Roll Hall of Fame and Museum.
Posted by Matthew K at 12:37 PM

Would you vote for this grin? 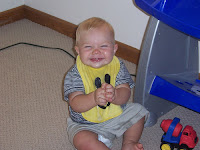 Our local ABC affilliate has a link on their page to have a photo vote. Each week they list a topic and you have a few days to upload your photo and then from the 500 submissions they receive, they pick the top 10. There were a few topics I had the "perfect" picture to submit but was to late. This week's topic "Goofy Grins". My children give me plenty of goofy grins all the time, but the most recent one I capture was my dear little Patrick. Well Patrick didn't make the top 10, but I still think its cute. What do you think?

Email ThisBlogThis!Share to TwitterShare to FacebookShare to Pinterest
Labels: family

YEA!!!!!!! Anyone knows where I could purchase a "It's Tribe Time Now" t-shirt - please let me know.

Great game! Great celebration! I'm looking forward to seeing where we end up - hopefully with the home field advantage. I'm glad they clinched at home because there would be no way in the world I could stay up for a Seattle game this week.
Posted by Joyce K at 10:50 AM 4 comments:

A game of skill 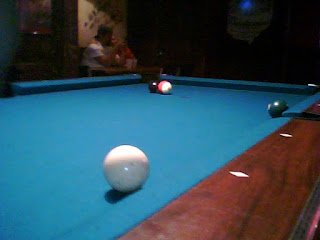 Shooting pool at Brathaus. I think I'll blame the beers for my poor play.
Posted by Matthew K at 9:07 PM 1 comment:

Email ThisBlogThis!Share to TwitterShare to FacebookShare to Pinterest
Labels: friends 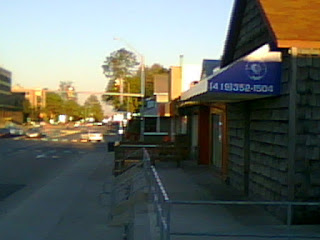 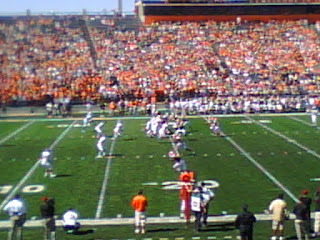 A sunny day - The Doyt looking good, and the mighty BG Falcons feasting on Temple Owls.
Posted by Matthew K at 1:00 PM 1 comment:

I was perusing Sports Time Ohio website when I checked out some of their Tribe gear. You wouldn't believe they are actually selling a cap care kit. If you don't believe me check it out?

What I think I find shocking the most is there is an 8 page guide that accompanies the kit.

Only in America.
Posted by Joyce K at 1:48 PM No comments: 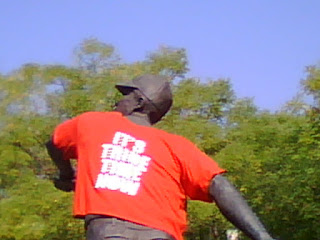 The Bob Feller statue is wearing a new shirt. I was walking when I took this picture with my cheapo camera phone. Sorry about the blurriness.
Posted by Matthew K at 7:10 PM No comments:

Cheating in the NFL

Ok – look who is apologizing now. I just saw on ESPN.com that before his regularly scheduled press conference that Bill Belichick issued an apology to his team on Wednesday and confirmed that he has spoken to NFL commissioner Roger Goodell about his "interpretation" of league rules that ban videotaping of the opposing sideline.

Here was his statement:
"At this point, we have not been notified of the league's ruling," Belichick said in a statement. "Although it remains a league matter, I want to apologize to everyone who has been affected, most of all ownership, staff and players. Following the league's decision, I will have further comment."

Does that sound like they are guilty or what??!!

This was an interesting side story on the same page:
In August, ESPN.com ran a comprehensive package on cheating in sports. Jeffri Chadiha wrote the NFL portion of the package. Among the ways NFL coaches try to gain an advantage was trying to descramble signals sent from coach to player: "When Marty Schottenheimer coached the Cleveland Browns in the late 1980s, he routinely sent a scout to watch the signals opposing teams used to relay messages from coaches to players. When the scout returned, Schottenheimer's staff would watch the game film and match the signals to the plays that followed. "[Herm] Edwards said the same is true today. It's common for coaches to watch standard game tapes (which include shots from the press box and end zone angles), sideline tapes (which usually wind up on highlight shows and include footage of players and coaches talking on the sidelines) and even the television shows of opposing coaches for tips."

Maybe the Browns should start stealing some signals again. Better yet we should get a new coach!
Posted by Joyce K at 1:29 PM 2 comments:

I copied and pasted the article in fear that because this is an "IN" thing on ESPN it could disappear at any moment. Amen Peter Gammons!

Are you scoreboard watching?

I'm not talking about the Tigers - forget about them. They are done. We need to watch what LAA are doing. They 4 percentage points better than us. Right now I'm guessing if the playoffs started today, it would be 1) Boston 2) LAA 3) Indians and 4) New York. That would mean we would face Boston. I personally would rather face New York first while LAA and Boston fight it out. I know you are thinking but JoyceK the Yankees beat us everytime this year. I think we will be a different team in the postseason where we can handle anyone of these teams. I would just rather not face Boston and then LAA to get to the World Series. I would rather have the cake-walk!!
Posted by Joyce K at 2:13 PM 1 comment:

A change at QB

I just read online that Charlie Frye is going to Seattle for a 6th Round Pick. The Browns are to sign Dorsey - who Seattle worked out last week and didn't want. 1) Hello Browns - we gave up our 1st Round pick to get Quinn - can we try and get at least a 2nd Round pick for Frye? 2) How bad is Frye that we only got a 6th Round pick? 3) We still stink even if they start Dorsey this week. Maybe we will luck out because the Bengals have a short week b/c they played last night.

I must agree with the Browns that something had to happen because you can't release the bad punter that bailed you out last week because your regular punter has a bad back and keep 3 mediocre QB's.
Posted by Joyce K at 2:09 PM 1 comment:

They said they made improvements in the offseason but I don't think they showed up yesterday. I will admit I did not watch the whole game but from what I saw they still stink. I hope the tailgaiters had a good meal! I don't think Quinn should be played yet - I think cut Frye or Anderson and let Dorsey play.

I do think this - if we played everybody's 3rd string we would be Super Bowl Bound!
Posted by Joyce K at 11:05 AM 1 comment:

The very warm temperatures here in Lake County obscure the fact that is will soon be Autumn. Although not technically Indian Summer, I got Indians Fever. I admit, I went through a little funk in early August. So did Eric Wedge, before he challenged the team publicly to prove they were tough enough to compete. Since then the Tribe has put it together.

Email ThisBlogThis!Share to TwitterShare to FacebookShare to Pinterest
Labels: Indians 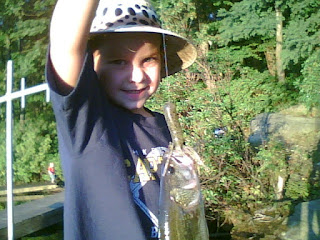 We caught a bass! (John is an excellent coach.)
Posted by Matthew K at 8:35 PM No comments: