I'm surprised that Phillies have a 3-1 lead right now as last night's game is suspended due to rain. I think there have been more than a few blunders not just by the umpires. I think Bud Selig and his crew have tried to force the issue when it comes to the weather. There is no way the game should have been played Saturday night. I think starting a game at 10pm when the fan base is on the East Coast is ridiculous. Then to have the field get as bad as it did was just stupid. This evening they are calling for bad weather again and Bud vows "to wait as long as necessary even if its until Thanksgiving". I think the comment that gets me ticked off the most is Bud saying if the Phillies were winning when the game was stopped he would have made them continue play to protect the integrity of the game. How is changing the rules when you feel like it protecting the integrity of the game? The Rays are lucky they scored in the top of the 6th inning so the game is tied. That protected the integrity of the game. Selig you are an idiot. It's time for a new Commissioner.
Posted by Joyce K at 9:30 AM 2 comments:

This Just In: UN Staffers ♥ Obama

The Washington Post really digs deep on this one. My comments in bold brackets.

An informal survey of more than two dozen [more than 24 - that must have taken half the morning!] U.N. staff members and foreign delegates showed that the overwhelming majority would prefer that Sen. Barack Obama win the presidency, saying they think that the Democrat would usher in a new agenda of multilateralism after an era marked by Republican [entirely justifiable] disdain for the world body.

Obama supporters hail from Russia, Canada, France, Britain, Germany, the Netherlands, Sierra Leone, South Africa, Indonesia and elsewhere. [like Leavenworth - where Ayers should live in a perfect world] One American employee here seemed puzzled that he was being asked whether Sen. John McCain (R-Ariz.) was even a consideration. "Obama was and is unstoppable," the official said. "Please, God, let him win," he added. [so much for separation of church and the one world state]

"It would be hard to find anybody, I think, at the U.N. who would not believe that Obama would be a considerable improvement over any other alternative," said William H. Luers, executive director of the United Nations Association. "It's been a bad eight years, and there is a lot of bad feeling over it."[tell me; why do we host the U.N. on American soil?]

I didn't watch it, because I knew the good people at Hulu would let me check it out. A part of me thinks that undecideds might see this and think "She seems pretty cool. Why all the hate?" But then the realist in me says "The aren't laughing WITH you Sarah."

The lefties are saying he is a McCain plant. Of course they would. They can't come to terms that there are people out here in fly-over country that actually hold these opinions, LIKE this country and don't apologize for it.

You knew what was going to happen to him because he caused Obama to share with us that he really does think and talk like a Marxist in unrehearsed moments, right? The city of Toledo, the leftist blogs, the media and the labor unions are causing a shitstorm to fall on him.

Update: Is this bit from the Associated Press supposed to be an labeled "analysis" or are they usually this snarky?

How does one study for a lipness test?

Google Trends is a fun website to monitor popular searches on Google on a day-to-day basis. Some blogging types use it as the proverbial finger in the wind to help them determine what subject might drive traffic to their site. Shameless or savvy? I report, you decide.

Sometimes the searches that percolate to the top just make you scratch your head. But today's takes the cake. During the debate, the candidates both invoked the "There will be no litmus test for Supreme Court nominees." promise.

Apparently more than a few people misheard that and bolted to Google to find out what a "lipness test" is. Check out #16 (update: now it is #18).

Blog Recommendation - The Art of Manliness

I was recently telling Limber Joe, who will one day post here, about a blog post I had read. It occurred to me that I rarely out-and-out recommend a blog.

Here is one - The Art of Manliness.

A recent post was about sea shanties. No, they are not slapdash submarine shelters. I did not wake up the morning I read it thinking about sea shanties, but went to bed a little more hip to the working man's entertainment before iPods were so ubiquitous in the workplace.

But not all posts are so esoteric. Practical advice is to be found as well. Such as how to shine your shoes like a soldier. (I already knew)

They also share how to avoid and treat a snake bite. Those with a long memory my recall I could use some help here.
Posted by Matthew K at 10:29 PM No comments:

Email ThisBlogThis!Share to TwitterShare to FacebookShare to Pinterest
Labels: reviews

As loathe as I am to say anything nice about something connected to Ted Turner, this TBS Hot Corner thingy ROCKS. You may know that I spent a couple years in college studying the radio-TV-film stuff. One of the things I really enjoyed and attracted me to this was the ability to get "behind the scenes" and see the uncut or raw footage. To be the director, if you will. 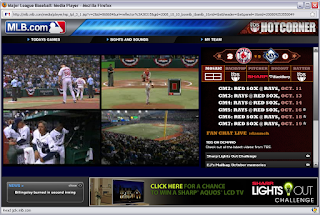 TBS is allowing anyone with an Internet connection to be their own director. They are streaming four camera angles and allowing viewers to choose the one they like or stick with all four in mosaic mode.

There seems to be about a thirty second latency on the stream I am watching now. I do not know if that is by design to preserve the ratings on TBS or simply a technological artifact. In any respect, it is like having your own instant replay.

If my son John ever finds out about this, he will be very hard to put in bed as long as the playoffs are on TBS. So - Fox - what about it? You brought us the miked base and the glowing hockey puck. Bring on the multi camera directors cut of live sporting events!
Posted by Matthew K at 11:41 PM No comments:

The 1st Round of Playoffs

Well I'm a bit surprised that the Dodgers and Phillies have jumped out to a 2-o lead. Although I do not follow the National League except because of who was traded I am rooting that the former Indians do well. CC has carried his team on his back to get to the playoffs but again he is not stepping up when it counts and his team might go home tomorrow. I am quite impressed how Tampa Bay keeps getting the clutch hit or home run when needed and then in the late innings piles it on. It will be interesting to see if the home cooking in Chicago will help them win at least one game. I'm not counting on it nor am I rooting for it. I haven't been able to watch any of the Redsox/Angels series. I guess the Angels are a bit flat without having to fight too hard to get into the playoffs.

On a side note - I'm a bit miffed that our local ESPN radio affiliate only carries the games when it "fits into their schedule". Its a bummer when I want to listen right before I fall asleep.
Posted by Joyce K at 9:57 PM No comments:

Andy and Angela - What a couple

Fans of The Office know that Andy Bernard and Angela Martin are engaged. What they might not know is that they...OK mostly Andy it seems...have created a website (update 2/9/2017: now points to a boring blog) to help friends, family and VERY interested co-workers (Dwight) keep abreast of the plans for the joyous occasion.

Here is a sample:


Wedding Party Apparel: We haven't finalized colors or anything just yet, but we're thinking nothing too fancy for the gents, just the normal Bernard wedding apparel: top hats, coat tails, and canes if you've got 'em. The attire for Angela's bride's maid will be lovely too: something boxy with a hemline below the ankle. No bare arms. No open toed shoes. More restrictions to come.
Hair and Make up Ideas: Hair up, no make up for her. I may apply a little powder.

Give me a break, Greeley

Andrew Greeley is a Catholic priest and a writer of, um, popular literature. His way with words is so crafty, so nimble, so superior to most of us that he can write this:

I was wrong about the first McCain/Obama debate. A third of the way through the event, I said to one of my guests, "My guy is getting creamed!" Note that I did not say, "My candidate is being beaten into the ground." I don't have a candidate. Priests, like columnists, are not supposed to endorse a candidate. But one of the candidates is from my state and my city, and we shared a pulpit once. So of course I hope he wins. But that doesn't mean I endorse him. As I have said repeatedly in this column, I think he will lose because the country is not ready for a smart, attractive, charismatic man -- if he has skin slightly darker than a Sicilian's.

A breathtaking journey of name-dropping, sarcasm, political prognostication, disdain of his countrymen (countrypersons?) and bigotry in one short paragraph.

Keep keeping those endorsements to yourself Andy!
Posted by Matthew K at 9:42 PM No comments: