Enough with the dead chimp, please!

Every few news cycles (which is to say every few hours) there is a super hot story that I regard as a complete non-story. What I mean is there is no reason a serious news organization should cover it because there is no benefit to be had by sharing with the public in great detail every bit of information.
Stay with me. The peanut processing plant/salmonella story is news. You could die if you eat the wrong brand of peanut butter and crackers. The recently passed legislation is news because it will either ruin or save the country. Depends if you are watching NBC or FOX.
One story that is headlining everywhere is the crazed chimp story. Why? What are the chances that 99 44/100 of us are ever going to bump into a domesticated chimp. You pretty much have to seek out an encounter with a lower primate living as a slacker man-child.
So the minute-by-minute BREAKING NEWS and UPDATES are not really in the interest of public safety or edification. They are driven by entertainment . Sorry, news people, I'm not entertained by the 911 call.  I don't really care to hear what Travis' "mom" has to say in recounting the details.

My breaking point came when I visited my favorite local station's website (WKYC.com) and saw splashed at the top of the page -  ALERT: Woman mauled by chimp being treated at Cleveland Clinic.
If you work at a modern broadcast news establishment I'd imagine you must be pretty demoralized by now. You probably went to school to "comfort the afflicted and afflict the comfortable." Now you've been reduced to Bonzo Goes Berserk.
And too think February sweeps were delayed this year.
Posted by Matthew K at 10:36 PM 3 comments:

Email ThisBlogThis!Share to TwitterShare to FacebookShare to Pinterest
Labels: media 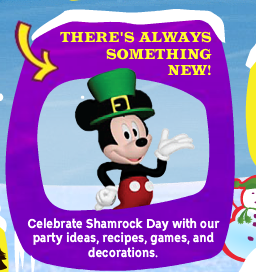 With four little boys in the house, we inevitably will tune into Playhouse Disney. Most of the programming is enjoyable, and there are no commercials for toys, sugary cereal or whatever is being pimped to the kiddies on other channels.

I can sit through the multicultural PC stuff. Comes with the territory.

However, I saw something on the Playhouse Disney website that really "got my Irish up"! They are promoting party ideas for "Shamrock Day". See the picture of Mickey Mouse in a leprechaun hat.
I "get" that we all are encouraged to drop the Saint from St. Valentine's Day. It's about hearts and flowers. Have some candy hearts with corny or risque saying and pay no attention to that bishop and martyr.
But it does not work so well for St. Patrick's Day. I suppose you can call it St. Paddy's Day to make it a little more festive. But then you still have that problematic reminder that this is a day to honor a specific individual. And he was - please cover the children's ears - Catholic. It gets worse. He was a member of the clergy.
Hope your brogans are buckled tight. I've heard that some people actually observe this day by starting it in church.
So what is a multicultural politically correct network to do? It seems to only workaround is to rename it after a member of the clover family.
I would love to see the look on the faces of folks who came up with this solution when they find out the only reason anyone cares about the shamrock. Dig it, this dude Patrick used it to explain the Trinity to heathens. I expect next year we will find out all about Pot 'o Gold Day from Disney.
UPDATE: they are still at it in 2010 - Try to find the name Patrick or any mention of Ireland.
Posted by Matthew K at 10:08 PM 5 comments:

A little Chlorine in the Gene Pool!

125 fisherman rescued, one dead on Lake Erie. They apparently had built a bridge of pallets to reach the outer ice flow. Guess what? The pallets drifted away!
Posted by Brother Drew at 5:16 PM 3 comments:

The kind of stimulus we can do without

I saw this first at The Corner at National Review. Reason.tv has a little fun with the snake oil we are being sold.

Notice that I omitted capital letters? When you despise a team as much as I do, it makes a certain amount of sense. Don't want to show too much respect.

Here comes the point of this post. The Cleveland/pittsburg rivalry is dead, and has been for quite some time. The local media wants to make sure that Mangini understands what the rivalry means. Does he understand it? Does he know the history? Will he ensure that the players understand the rivalry and its history? Excuse me! Where have you been?

In order for there to be a rivalry, there has to be, at the very least, a SNOWBALL'S CHANCE IN HELL that the two rivals will compete on a level field. Right. There should be some doubt as to who will win. We haven't seen that in what, 14 years? Truth be told, we haven't seen a competetive rivalry since the 1960s.

If you care to log onto www.nfl.com, you can look at the cold, hard stats. For the first three decades of the the Browns/steelers matchups, the Browns dominated. The steelers sucked-out-loud when it came to the win-loss column. They did, however, play the Browns competetively. The rivalry was born. Then, when the Browns began their decline (insert: "bradshaw"), they still played the steelers like it meant something.

Until Cleveland can field a team that stands a chance of beating the steelers, the rivalry is dead. Currently, the Browns are a joke in pittsburg. Need proof? Travel to pittsburg and take a look at the sidewalk vendors. The most popular t-shirt reads, "IT'S SO EASY TO BEAT THE BROWNS".