I know it is a long season, so forgive me if I got a little depressed about how my Tribe was playing. I'm still not convinced that they are the AL Central favorites, but the last few days have been fun.

Today the weather was in the 80's - the blimp was overhead and my Cleveland Indians beat the Yankees, even with Paul Byrd on the mound. John asked me "Why does Uncle Drew think Paul Byrd is bad?" and Paul promptly served up his second homer of the night to Giambi. "That's why son, that's why!"
Posted by Matthew K at 11:00 PM 1 comment:

The June Swoon Came Too Soon 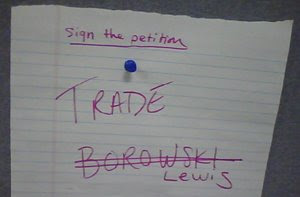 Cleveland Indians fans are used to the Tribe getting our hopes up early, only to dash them by the All Star Break. Can't say they are setting the bar too high this year. As a matter of fact, a petition was posted at my workplace Tuesday and amended today.
Posted by Matthew K at 9:26 PM 1 comment:

I'm no expert on journalism or religion, but sometimes I pick up the morning paper and almost do a spit take with my iced tea. Yesterday was one of those mornings.

Take a gander at Georgie Ann Geyer writing about the Pope's visit next week. Before I got 5 column inches into it, I spotted errors that would have never made it past her first draft or an editor if either had an even passing familiarity with the subject.

Next to his predecessor, the image of Benedict was often that of a snarling defender at the gate of Vatican ultraconservativism, standing side by side with the Swiss Guards, moral bayonets at the ready, defending the past.

Colorful. But more of a reflection of a cartoon you may have seen He is constantly looking at current writers in theology and philosophy and accepting some thought - rejecting some.

A conservative who grew up in Germany during World War II, Benedict will never agree with Vatican II, the historic 1962-'65 liberal confab of the church.

Um...he was there and helped form some of the documents that where produced by the council. Vatican 2" wasn't just about giving us guitar masses. For the record, Pope Benedict ain't crazy about guitar masses.

Most important, he has overseen the church's efforts to define a series of "new sins" that could change the world, if applied. ...

(Quoting some guy that works in the curia -ed) He went on to speak of everything from illegal drug use, genetic manipulation, environmental pollution, bad ecological practices, and economic inequality in which the poor are getting poorer and the rich growing richer, fueling unsustainable social injustice. These, he said, are the "new sins."

Those all could fit under the tried and true seven. Besides attributing this claptrap to Benedict is like holding a head of state responsible for some bureaucrat's report about a proposed change on parking regulations on government leased property.

No one knows exactly why the pope chose to come to America at this particular time.

2008 is the bicentennial of the designation of Baltimore as an Archdiocese. Just sayin'

He is, amazingly, even an admirer of much of Protestantism.

Why are you amazed, Georgie? Are you assuming that Catholic leaders are by definition religious bigots? Wouldn't we be bigots to make such an assumption?
Posted by Matthew K at 12:36 AM 1 comment:

OH! The Pressures of Blogging

I'm tempted to make no apology for my lack of blogging here and elsewhere. I'll just try to pretend that the pressures of authoring a highly popular and influential site caused me to go into seclusion.

The NYT would be sympathetic to that argument while they make guesses as to how much cash I was pulling down for my torment.

Alas, I am just kind of lazy. But I'll be back into it now. The Supreme Pontiff's visit will provide lots of fodder for media criticism and the Tribe is off to a rocky start. I'm back!
Posted by Matthew K at 12:07 AM No comments: