It was 1978 when this episode of WKRP in Cincinnati first aired. I think I went into radio because of this show.

Email ThisBlogThis!Share to TwitterShare to FacebookShare to Pinterest
Labels: food

A New Elf Yourself Creation

Send your own ElfYourself eCards

A friend on Facebook linked to this YouTube channel. This person (Dan -or- videoholic50sthru70s) has made it his mission to collect, and now share, video for 50's through the 70's. Remember Mona Scott and Doug Adair? You can go to the channel and find Blizzard of 77 footage and many other blasts from the past.

LIFE Magazine and Google recently released a fascinating collection of archival images. I was browsing the collection and looking at old baseball images for the Cleveland Indians, Great stuff.

However - check out this image. The caption says fans are arriving at a ball game in the old stadium. Are they doing a lap around the ballpark before they enter? 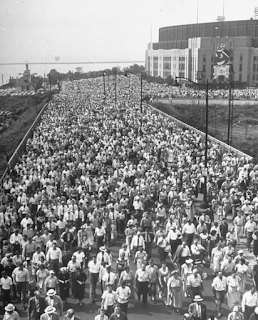 And this caption is even less accurate!
Posted by Matthew K at 12:29 AM 1 comment:

It may be snarky, but I think I agree with it. 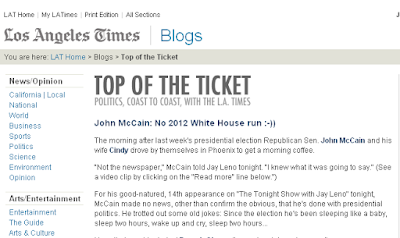 I was browsing Google News headlines and I came across an emoticon in a headline. You don't see that every day. The LA Times political blog has a smiley face after the  headline that reports McCain won't run in 2012.  I kind of feel the same way. But I suspect I'm happy for different reasons than the LAT staff.
Posted by Matthew K at 12:20 AM No comments:

Snazzy new seal you got there

You know how the two teams in the Super Bowl or World Series always have t-shirts and hats and other gee-gaws made up in advance proclaiming them champions? One team always has to throw them away or donate them to some relief agency. Children in foreign lands scamper about in "Cleveland Indians 1997 World Champions" gear, I suppose.

This thought crosses my mind as I catch a glimpse of Barack Obama's first news conference in a LONG time. Remember how he had a cute seal on the campaign trail? Folks thought it was a bit presumptuous, so he put it in mothballs.

But today is different. Today he is President-Elect and he has an office and everything. To be fair, it does not seem to say "Obama" or "The One" on it. Maybe these are government issue and McCain has one in the dumpster outside his office. 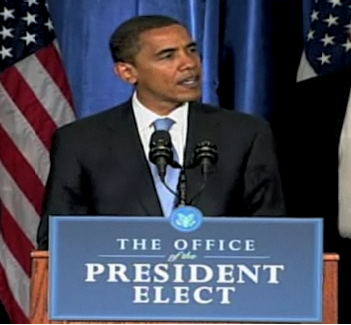 Update: I know that many people remarked that the President-elect was an inspirational leader. I did not really see it until now. He has moved me.

Get your own at Says-it.com
Posted by Matthew K at 12:23 AM No comments:

For All The Saints About TO ROCK!

I'm not a super-duper arch-conservative Catholic. I'm not a guy to get in a huff over applause in church. or contemporary music. I even tapped my feet at the recent polka mass I attended.

I'd like to learn and pray a little more Latin. However, I was educated by guitar playing nuns with a penchant for felt banners, so I'm not pining for the good old days of my youth.

All I ask of the priest is to stick to teaching what the Church teaches and respect the authority of his bishop and B16. Sometimes even my low threshold is too high. Amy Welborn asked recently what All Saints Day and All Souls Day looked like in her readers' parishes. Here is my story.
Posted by Matthew K at 10:02 PM No comments: